Are you looking for more challenging yoga poses to test your body? Then the Tripod Yoga Pose is a must! You must include this amazing and difficult Tripod Headstand position (Sirsasana II) in your repertoire of asanas! After a few sun salutations to warm up my body, I prefer to execute this posture amid my practice. But if you have any neck, arm, or shoulder issues for safety’s sake, please talk to your doctor before trying this posture.

What is a Tripod Yoga Pose?

The yoga pose known more generally as Sirsasana comes from the Sanskrit term “Sirsa,” which means “the head.” Another name for it is the “King” of all asanas.

Sirsasana li Konasana, also known as Tripod Headstand Pose Wide Legs, is an advanced level inversion pose. This is a Headstand Li variant. The body is maintained straight in the foundation posture while the legs are extended to the practitioner’s flexibility in the variation. This is the fundamental distinction between the two poses. This inversion variant calls for flexibility, strength, and balance in the lower body.

Tripod Headstand Wide Legs is an exercise that will provide practitioners with stronger, more bulging biceps and core muscles. It stretches the groins and the muscles of the outer and inner thighs. The hip joints’ flexibility will be progressively increased by wide legs. The brain and the entire neurological system benefit from new blood flowing via the inversion and pressure of the head. The upper body’s blood circulation is improved by turning over. It unclogs the pathways and facilitates the passage of prana. The circulatory, lymphatic, endocrine, neural, and digestive systems are only a few of the biological systems that are activated.

Regular practice enables the stance to be maintained for longer while sharpening focus and concentration. The practitioners’ worry and tension will be reduced because of the tranquillity this exercise gives. Such complex postures provide everyday life with a sense of equilibrium, steadiness, and tranquillity. Because the body immediately becomes peaceful whenever the mind is tranquil. Such difficult positions improve both physical and mental as well as emotional toughness.

Anatomy Behind The Tripod Yoga Pose

How To Do The Tripod Yoga Pose

While the Sirsasana stance permits the body to invert totally on the support of the arms, it is a great foundational posture, to begin with before attempting additional headstand pose variants. There are many other headstand poses that are similar to the tripod pose such as the:

Benefits of the Tripod Headstand Pose

Promotes blood circulation in the head and the eyes: Blood can travel to the upper body, including the brain and eyes, thanks to the body’s inverted posture. Greater nutrients and oxygen can reach the brain because of the body’s blood circulation. This shields the eyes from issues like macular degeneration and vision loss. In addition to preventing migraines and headaches, headstand yoga. The blood vessels in the brain strengthen and relax as a result of the constant blood flow.

Helps in memory improvement and concentration: The blood vessels’ health will be preserved by increased blood flow, which will enhance mental clarity and performance. Memory loss and Alzheimer’s disease can be prevented using it.

Helps relieve stress and anxiety: Sirsasana is one of the positions that facilitate the cooling of the body. When done in conjunction with calm, controlled breathing, it helps the body and mind unwind. For those who struggle with anger control, it might be beneficial.

Good for the heart: It is also excellent for cardiovascular functioning as the yoga pose helps relieve the stress in the heart by letting the flow of blood and clear obstructions. Yoga generally promotes mental and physical calmness, which lowers blood pressure and keeps it at a healthy level.

Cures piles and varicose veins: Blood build-up in the lower body, particularly the thighs and the anus, is the source of these issues. The same applies to people who have problems like edema. The headstand position helps to alleviate strain on the vascular system and encourages blood flow, which keeps the blood from becoming stagnant. Additionally, it permits the body’s liquid in the leg to drain and turns back the effects of gravity on our internal fluids.

Helps the pituitary glands: By applying pressure on the pituitary glands, this posture encourages greater secretion of the hormones essential for optimum health. The blood that enters the brain serves to strengthen the neural system, which also renews the endocrine system’s operations. The pituitary gland’s increased functions will also significantly aid in reducing diabetes.

All-natural remedy for hair loss: Lack of nutrition and inadequate blood flow are frequently the causes of baldness and grey hair. Regularly performing this position helps to keep the scalp healthy by enabling blood to flow and supplying nutrients, which in turn reduces hair loss and encourages hair growth.

Improves the immune system: By assisting the body in moving lymph fluids through the lymphatic veins, the Sirsasana pose strengthens the immune system. White blood cells, or leukocytes, are abundant in the lymph fluid and defend the body from infectious illnesses and blood-borne pathogens by destroying bacteria and viruses.

Since headstand yoga is a slightly complicated posture, learning and practicing meditation should be done with the assistance of a teacher or instructor of yoga. If you do something wrong, your body might be hurt. Before engaging in this posture, make sure your body is in good shape. Warming the body and the muscle before trying a headstand is a great habit to get into. If you have a neck or back injury of any kind, avoid doing this position. Pregnant women and anyone who is menstruating should also avoid it. Anyone with hypertension, heart failure, glaucoma, or weakened capillaries in the eyes should avoid any inverted positions. When performing yoga positions, never hold your breath. Not just the headstand yoga stance but all asanas should be performed with proper and regulated breathing.

Menstruation and inversions: Yoga instructors and yoga literature frequently emphasize that women shouldn’t perform an inversion when they are in menstruation. The teacher often doesn’t provide any sort of justification or explanation. Many explanations have been proposed, including those involving “reversal of menstrual flow,” “bad blood,” endometriosis, Apana, and other conditions. Nothing can withstand close examination. It’s your choice whether or not to invert during menstruation. That is entirely your choice if you so choose. Like anything else in yoga, inverting is a decision. You can decide.

An easier way to stand up if you feel powerless in your core is to put one knee on one set of triceps and the other leg on the other set. When you achieve balance, you may start lowering your knees off of your arms and straightening your legs up towards the sky. If this posture is comfortable for you and your core is strong enough, you can enter and exit the pose by bringing both legs together while maintaining a pike in your hips. If your hamstrings are flexible enough to let the crown of your head reach the floor, you can also enter this position from Prasarita Padottanasana. If you’re worried about falling over, practice against a barrier or with a spotter. You may tighten a strap over your upper arms slightly above your elbows to hold them in place if your elbows start to droop to the sides.

What is tripod yoga?

The longest form of inversion, an extended headstand without the assistance of the hands and arms, can only be achieved with tripod yoga. Before practicing full headstands, it is advised to first master the tripod position.

How do I perform a tripod pose?

The head, arms, and floor form a sturdy “tripod” basis while the palm remains on the ground. Finally, elevate each leg individually. Use your core to maintain control as you gently lower your feet to the mat to exit the posture.

How to prepare for a tripod headstand?

Start with shoulder-strengthening postures like chaturanga plank, and dolphin to be ready for a tripod headstand. You are ready to attempt the tripod headstand if you have mastered these stances. Starting with your hands shoulder-width apart, go on your knees.

What is a tripod headstand in Ashtanga?

One of the unsupported headstands that bring the Intermediate Series of Ashtanga yoga to a close is Tripod Headstand (Mukta Hasta Sirsasana A). Arm balances are frequently entered and exited using the Tripod Headstand.

For a multitude of causes, such as fear, tight hamstrings, weak or tight shoulder muscles, and more, a tripod headstand may be a difficult position. Incorrect posture during practice might potentially result in neck injury. But it only takes training (and a good teacher!) just like any position. Once you are confident in the pose’s overall shape and have developed the flexibility and strength to maintain it consistently, it may lead to several exciting and difficult transitions. 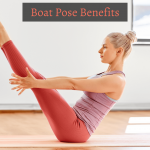 How to get into a complete boat pose? What are some of the crucial boat pose benefits? 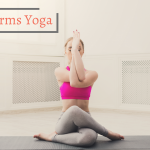 Eagle Arms Yoga – The Best Bird Pose for Your Body

The Benefits of Vinyasa Yoga and Much More

Yoga Body vs Gym Body. Which one helps in yielding your overall well-being?