Modern yoga is an excellent form of fitness and an incredible way to increase flexibility and maintain one’s health. Practicing yoga requires several basic items – a yoga mat for that soft firmness, a bottle of water, a comfortable room with the right ambience and temperature, and most importantly – easy-to-stretch clothes.

Since yoga can be rigorous, the smells that can attach themselves to your workout clothes can range from sweat around your armpits and neck to… more unpleasant ones around your leggings. You know what we are talking about. That’s right – it is that smell of one’s crotch in the leggings. That musty smell is extremely hard to live with. But fear not – we have solutions, so let’s talk about how to get crotch smell out of leggings.

The cause of this odor in one’s leggings is very easily explained. It is nobody’s fault and it is not preventable, as it is a natural side effect of making yoga an everyday workout.

The human body is a marvel, and that is greatly due to the fact that it mostly has several mechanisms for maintaining itself. One of them is excretion, which is not restricted to the bathroom – sweat is also a form of excretion, for example, and perspiration plays an important role in maintaining the coolness of the body and getting rid of excess water in the system. The body also has a natural scent that is unique to every human connected to our pheromones. Specific odors also play a part in helping detect the presence of infections and diseases.

It is nothing to be embarrassed about, in short. It is natural for the human body to release fluids such as sweat for various purposes. And since a yoga routine can be an invigorating experience, it is natural for the body to react in its own way. Nevertheless, it is a common problem, one that has even been scientifically studied at the University of Alberta by Professor Rachel McQueen.

In fact, the problem lies less with the body, and more with the pants themselves. There are numerous different Yoga pants and leggings, click here to learn more about yoga pants vs leggings.

The fabrics used to make stretchable wear (which is growing more and more popular due to the popularity of athleisure as a dressing type) are generally synthetic in nature. Synthetic fabrics tend to retain the odor from the specific chemical compounds released by the body, causing a more prominent scent. Polyester is the best example of this phenomenon – it is one of the most common fabrics used in making gym clothes, and makes laundry day that much harder. Spandex is equally as bad in this regard, with nearly the same properties as polyester.

But even aside from the fabric, it is common for clothes that have been in use for some time to develop a smell. It is one of the long-term effects of working out that clothes tend to lose certain properties, such as the ability to smell perfectly fresh after every wash. Again, it is natural to a certain extent, and if it bothers you too much, the best thing to do would be to throw them away and buy new clothes.

Now that the explanations are done, on to the solutions.

Washing Away the Smell

A few simple changes to the regular laundry routine can help significantly with reducing the smell of one’s crotch in one’s leggings.

Firstly, turning fabrics inside out before putting them in the washing machine is a must. This way, the side of the fabric that has been most exposed to your body will directly come in contact with the detergent, taking out the smells at their source.

It is also a common practice to pour in more detergent to get rid of smells, but that has been proven to be counterproductive to washing away the odor. Too much soap will make it harder for the machine to wash it all away effectively, leaving traces of detergent behind on clothes. These remnants can cause a lot more issues if they directly touch your body, especially more sensitive regions, but primarily, they can attract bacteria, which will only make the scents worse.

Fabric softeners also hamper getting rid of the scent, as surprising as it may seem. These softeners essentially cover the clothes with a thin layer, making it extremely hard for the smell to escape naturally and only build up over time.

There are also several odor-eliminating products known as laundry boosters that come with specific purposes such as whitening clothes or maintaining dyes. There are also products that help with washing away scents effectively. The most common of these is white vinegar. Adding just half a cup to the rinse cycle (or into the fabric softener section) can help wash away smells. Half a cup of baking soda at the beginning during the washing can also help. Other helpful products include vodka, tea tree oil, and enzyme cleaners (which are specifically built to deal with bodily fluids and odors).

For more professional products that are not homemade, searching online specifically for sports detergents can help. These detergents are made to wash sportswear while also taking care of common issues such as fabric elasticity, colors, and of course, odors.

If the problem is very severe, proper antimicrobial treatment needs to be done on these clothes. This treatment will target the microbes that are the true cause of body odors, not the secretions themselves. Copper is a common product in this regard.

It is also preferable to avoid drying the clothes in the washing machine at all. The application of high levels of heat in a closed environment only amplifies smells, which will make all the previous efforts worthless. The best thing to do is to hang clothes up to dry traditionally. Natural air with an adequate amount of heat in an open space will dry clothes with little to no remaining smells. This is especially important for fabrics like cotton, which needs to dry quickly in an environment with less humidity to wash away the odor properly.

Fabrics to Use – and Avoid

Techniques that wash away the smell are fine, but for long-term effects, changing the material of your clothes is the best way to go if you are extremely bothered by the smells.

As surprising as it may sound, one of the best fabrics that have been suggested as appropriate for workouts is wool. Not regular wool that is used for winter clothing, no, but fine merino wool, also known as performance wool. Due to results from recent studies, performance wool is becoming increasingly popular as a fabric suited for working out due to wool having the property of releasing moisture and odors relatively quickly, even quicker than cotton. It might feel a little weird to wear wool while doing yoga at first, but over time, one can get used to it and enjoy the benefits of it smelling significantly less.

Cotton needs to be used with caution. While it is the most popular fabric for a reason, as previously mentioned, if not dried properly, it can retain smells. Wearing cotton for longer workouts can also cause longer-lasting smells, as the humidity and heat caused by the workout itself can affect the fabric.

Synthetic fabrics are to be avoided. As trendy, popular, stretchy, and comfortable as they are, if the odor is a recurring and distracting issue, then fabrics like polyester, spandex, and rayon need to be avoided. Don’t be fooled by superhero movies where these fabrics are shown as most comfortable for fighting – the movies will not show superheroes doing their laundry, and that is because these clothes do not allow you to wash the smell away.

Recent studies have also shown that certain colors retain scents more. Black is one of the most common colors used for workout clothes, and easily the most popular color of yoga leggings, but it has been found to be harder to wash the smells from. For this reason, sticking to shades of gray or lighter colors has been found preferable.

Is it possible to wash the odor away entirely?

At first, it may be possible, but with use over time, it is natural for the smells to become somewhat of a permanent feature of your leggings. You cannot aim for perfection when your goal is health and fitness, and perhaps relaxation. Unless the smell is actively bothering you or noticeable by others during your yoga session, just let the scent be.

Why do these smells occur?

It is natural for the body to produce fluids to maintain itself. Vaginal secretions from vaginas are especially very important since they help maintain the pH balance of the nether regions. Certain lifestyle practices, diets, and medications can also affect the smell from the nether regions regardless of gender. But a particularly bad odor coupled with other worrisome symptoms could be a sign of an infection or an underlying medical condition, so it is best to check with a doctor.

What is the best fabric for yoga that will not retain a smell?

If a good open space with adequate air and heat is available and your yoga session is not too long, then cotton is ideal. For minimum scent retention altogether, performance wool is becoming an increasingly popular option. However, if you do not want to sacrifice the comfort of synthetic fabrics and their elasticity, then the best thing to do would be to keep buying new workout clothes.

When should I throw my clothes away and get new ones?

If the odors become too bothersome to you or anybody else and are extremely hard to wash away, then it is best to hit the stores again. How much it bothers you is a subjective limit, and if you tend to perform yoga alone and are not bothered by the smell, then there is no need to throw the clothes away.

Is it better to machine wash or hand wash yoga clothes?

Considering the aforementioned dos-and-don’ts, it is perfectly fine to wash yoga leggings through a washing machine. But if you want to be more careful and particular with getting rid of the smell, then it is best to take the effort to wash it yourself.

The issue of having the smell of one’s crotch in one’s yoga leggings is a common issue and nothing to be embarrassed about. It is a natural side effect of any workout session. Don’t be too ashamed to research particular solutions that may apply to you, and don’t be too conscious or bothered by them. We hope this article helped with possible solutions. Happy yoga-ing! 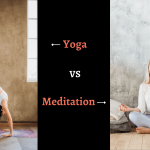 Yoga vs meditation, which one will benefit me more? 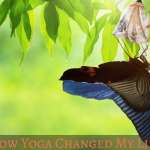 How yoga changed my life for the better by broadening my overall outlook?